I don't get to post here very often.  But I picked up an interesting specimen at a local flea market: a TruTime talking atomic watch - for a dollar.  The vendor didn't know much about, except that he 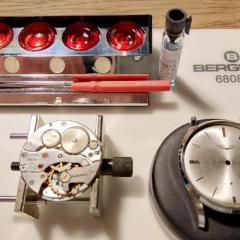 A dip in the ultrasonic bath, some lubrication, a new crystal and a pimpt up bracelet and it’s back to it’s 60’s bling bling shape. Not bad for a few dollars more, even Clint Eastwood would agree 😉